Andy Irons, one of the world's best surfers, at age 32, died suddenly on November 2, 2010, reportedly from dengue fever.  He was en route from Puerto Rico back to his home in Kauai, HI, when he was found dead in his hotel room at the Grand Hyatt in Dallas, Texas.

Here's a slideshow tribute showing some of the best photos of Andy Irons and his wife, Lyndie Dupuis, doing what he did best and loving every minute of it.

It is widely reported that Andy became ill with dengue fever, a mosquito-borne viral disease, while in Puerto Rico for the Rip Curl Search surf contest where he missed his Round 1 and 2 heats.

He was at a hospital in Florida and was on an IV drip when he reportedly insisted on going back home to Kauai to see his own doctor and be with this family. Unfortunately, he was extremely ill and could not board his connecting flight to Kauai on Monday, November 1st, and had to book a hotel during his layover in Dallas, in order to rest and get well enough to continue traveling home.

On Tuesday morning, hotel staff found Andy dead in his hotel room at approximately 10 am.  An autopsy has been performed and the cause of death is still inconclusive and will take several weeks to complete.

Andy Irons is survived by his beautiful wife, who is pregnant with their first son and is scheduled to give birth in December, his father Phil Irons, and his brother, Bruce Irons, who is also a world class surfer.

The entire surfing world was in complete shock when Andy Irons' death was confirmed.  Andy was a fierce competitor and was well-respected within the surfing community.

He is said to be the only surfer worthy enough to be a rival to Kelly Slater, a World Champion nine times over.

Andy Irons recently won the Billabong Pro contest in Tahiti in September 2010 after a year-long self-imposed break from surfing. Andy was sponsored by Billabong.

In the water, Irons was known to be a fierce competitor.  On land, he was a beloved husband, son, brother, and friend.  He was a native of Hanalei, Kauai, where he learned to surf in the shallow reefs of the North Shore.

An Emotional "Celebration of Life" and

"Final Paddle Out Goodbye to Andy Irons" at his hometown in Hanalei, Kauai on November 14, 2010

Thousands of surfers, friends, locals and people from around the world converged in Hanalei, Kauai at Pinetrees, the surfbreak where Andy Irons learned how to surf as a young boy.

An incredibly emotional paddle out goodbye was led by Andy's family and very pregnant wife, Lyndie Dupuis Irons, who was on a boat with the immediate family as thousands of surfers surrounded them for the touching ceremony.

Andy's ashes were cast out into the deep blue ocean as thousands cheered and celebrated his life and legacy.  Click the video below to watch this final goodbye.

A Paddle Out Tribute in Puerto Rico for Andy Irons

More than 130 surfers paddled out in Puerto Rico on Thursday, as officials suspended the 2010 Rip Curl Pro Search contest, to pay respect to Andy Irons.

The surfers paddled out with flowers in tow, created a wide circle, and paid tribute to one of their own.  The flowers were released into the air as they said their emotional goodbyes to Andy as they consoled themselves by celebrating his life and vowed to remember him forever. 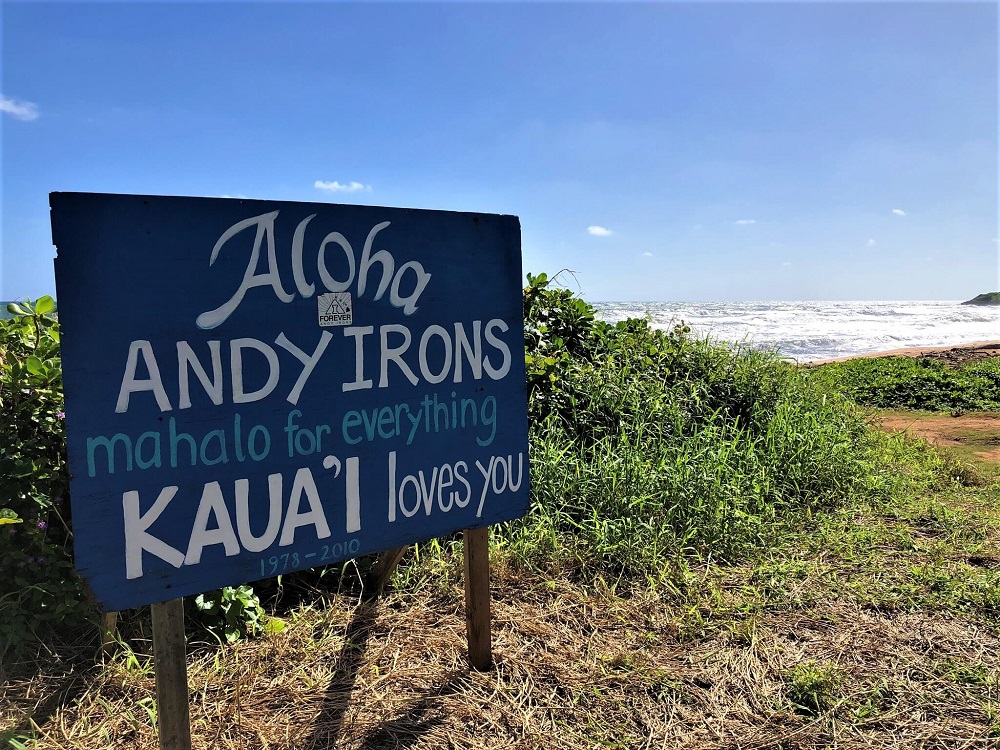 If you plan on visiting the island of Kauai, make sure to pay a visit to Kealia Beach that's 5 minutes outside of Kapaa.  You'll find a beautiful tribute sign expressing a big farewell to Andy.  It was his home island that loved him dearly.

Rest in peace, Andy Irons.  We will all miss you.