Oahu breweries are making their presence known with appetizing food, lively environments and some memorable beers worthy of the pour. Hawaii has been experiencing a renaissance recently of breweries popping up all over the chain of Hawaiian islands, and Oahu has its share of winners that are brewing some tasty crafty beers. Explore well established breweries making a name for themselves including Kona Brewing Company and the Maui Brewing Company, along with smaller up and coming establishments like the Hana Koa Brewing Co. and Lanikai Brewing Co. 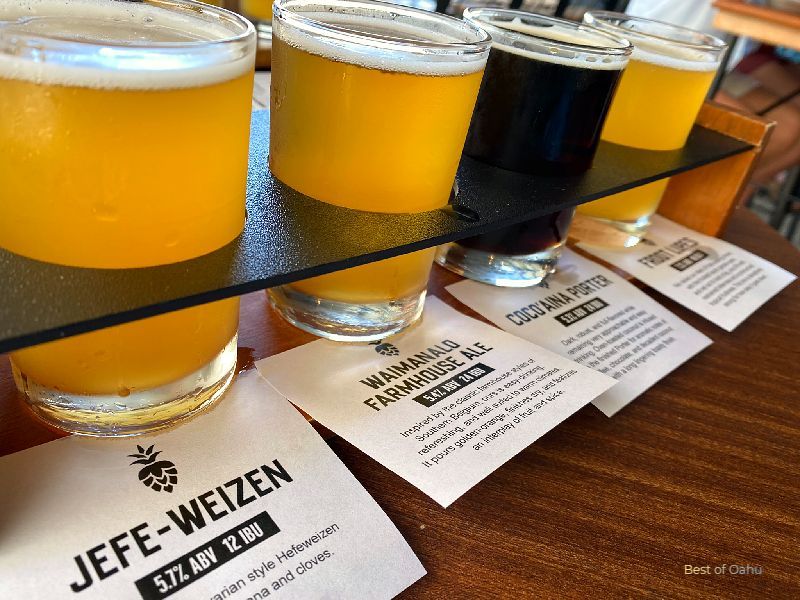 While California, Chicago and Oregon can all lay claim to being the states that produces the best beer in the US, in recent years Hawaii has developed a reputation for being the hottest new player on the American brewing scene.

This is particularly prevalent in Honolulu, where there has been a noticeable development of local craft breweries opening up over the past decade. And what a better island to make such a presence than on the “Gathering Place” island known as Oahu.

Incorporating a host of exotic, tropical ingredients like papaya, dragonfruit, passion fruit, and pineapple, a number of Oahu breweries are blazing a trail for the reputation of Hawaiian beer around the world.
While there are no bad establishments on the island, here are 7 best Oahu Breweries worth exploring. 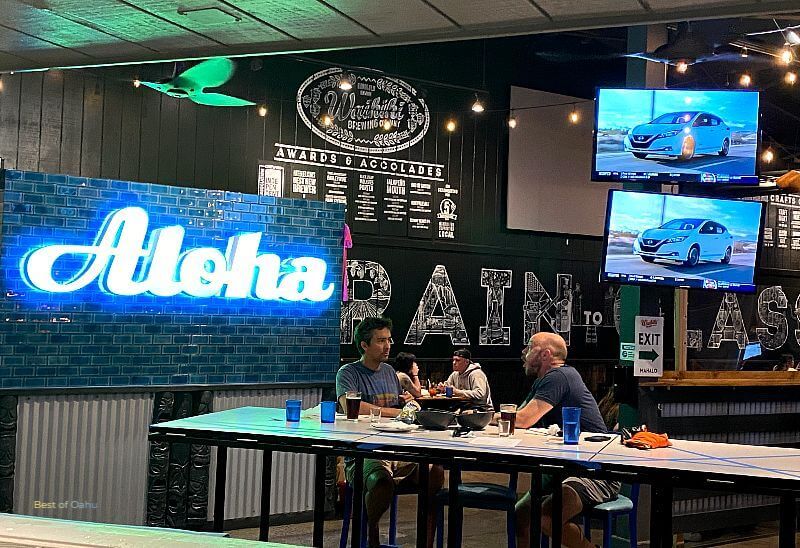 The Waikiki Brewing Co. is a beer force to be reckoned with. Priding themselves on offering good times, great food and a fantastic range of award-winning craft beers, these guys have been wowing judges ever since they first launched in 2015. 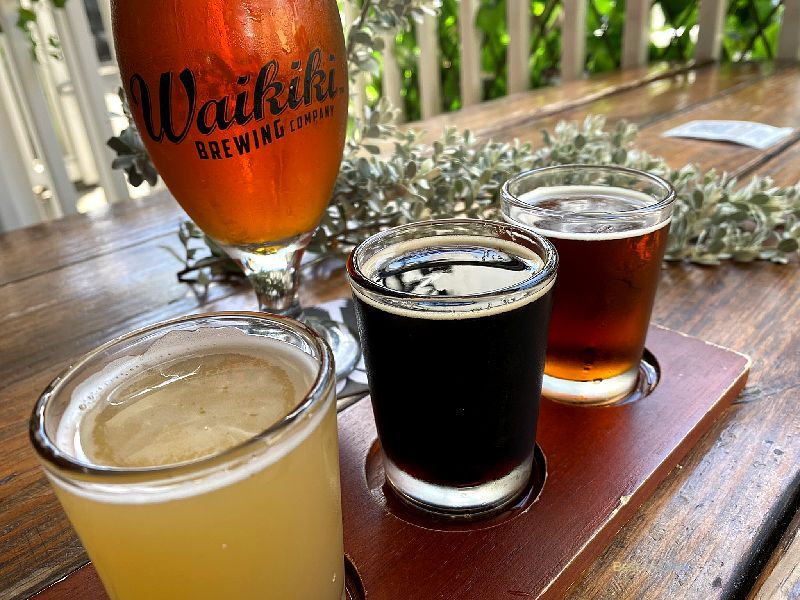 Also check out their beer cocktails, where they have come up with inventive creations using their beer, including a chocolate rum Brew-Hoo Brown Ale, and a Jalepeno Bloody Mary Amber Ale Michlada.

Between them, they have been awarded gold, silver and bronze medal accolades at such prestigious events as the Denver International Beer Competition, Hawaii Craft Beer Awards, Great American Beer Festival and US Open Beer Championships. They were also bestowed the title of Best New Brewer in Hawaii 2015 by RateBeer.com. 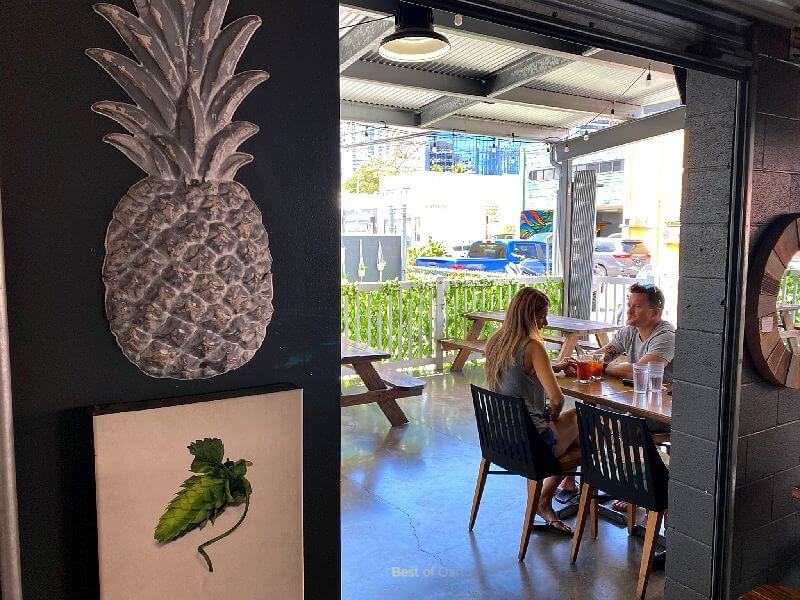 Located in Waikiki, their seven-barrel brewhouse can produce over 1100 barrels every year. They also have a new location in Kaka'ako, and Lahaina & Wailea if you’re visiting Maui.  Presented within a family-friendly space that has a vibrant, buzzy atmosphere, all venues have a full bar and restaurant.

The Waikiki Brewing Co has a good pub fare menu featuring a range of burgers and pizzas. Their highlights are their smoked wings, ahi dip, superfood salad, Kalua pork and Portuguese sausage from the smoker, Pineapple Fried Rice with Coconut Shrimp, and a Prime French Dip Sandwich. 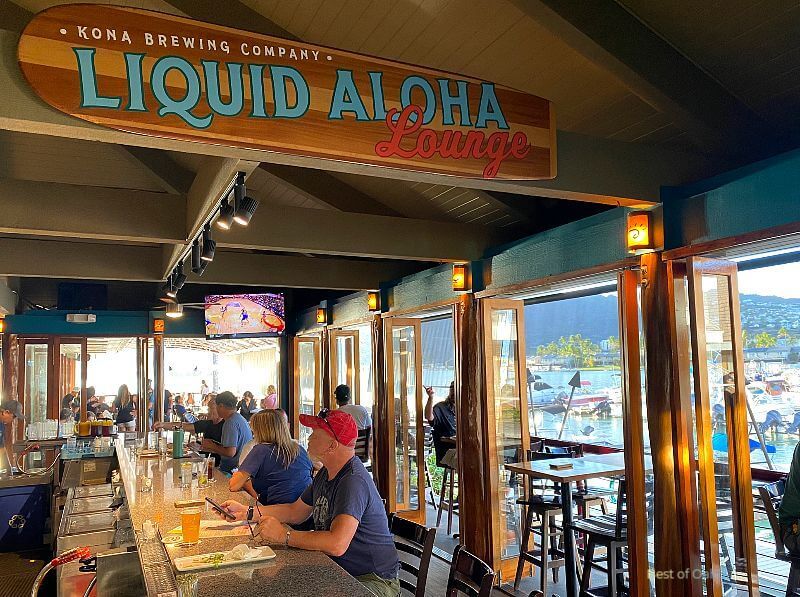 The Kona Brewing Company is quite the success story, as it became one of the first widely distributed beers outside of Hawaii. Launched in 1994, it now distributes its beer across 36 American states, as well as 10 different countries around the world including Australia, Brazil, Japan and Canada.

Boasting an admirable commitment to producing beers that are locally brewed in the most eco-friendly way possible, their beer is renowned for being refreshing, easy to drink and inspired by the magnificence of the islands. 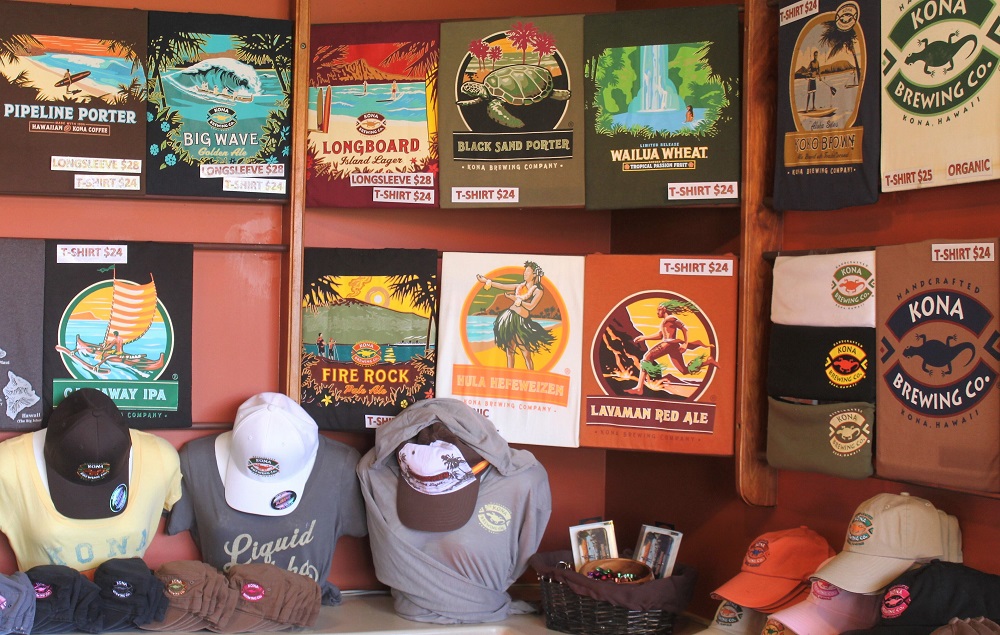 The original Kona Brewery is situated in Kailua-Kona. However, they also have a restaurant location in Oahu, in Hawaii Kai right on Koko Marina's docks. They have a fun open air environment to dine with family and friends.

Their beer poster-art logos are attractive, and they also have a nice range of merchandising featuring the designs including shirts hats, glasses and outdoor umbrellas.

Oahu breweries that are making major waves in the American beer industry is the Maui Brewing Co.

Originating in Maui as the name suggest, they are now the largest craft brewery in Hawaii, with their Kihei Tasting Room offering fabulous brewery tours & beer tastings.  Today they have 2 Oahu breweries that you can visit. 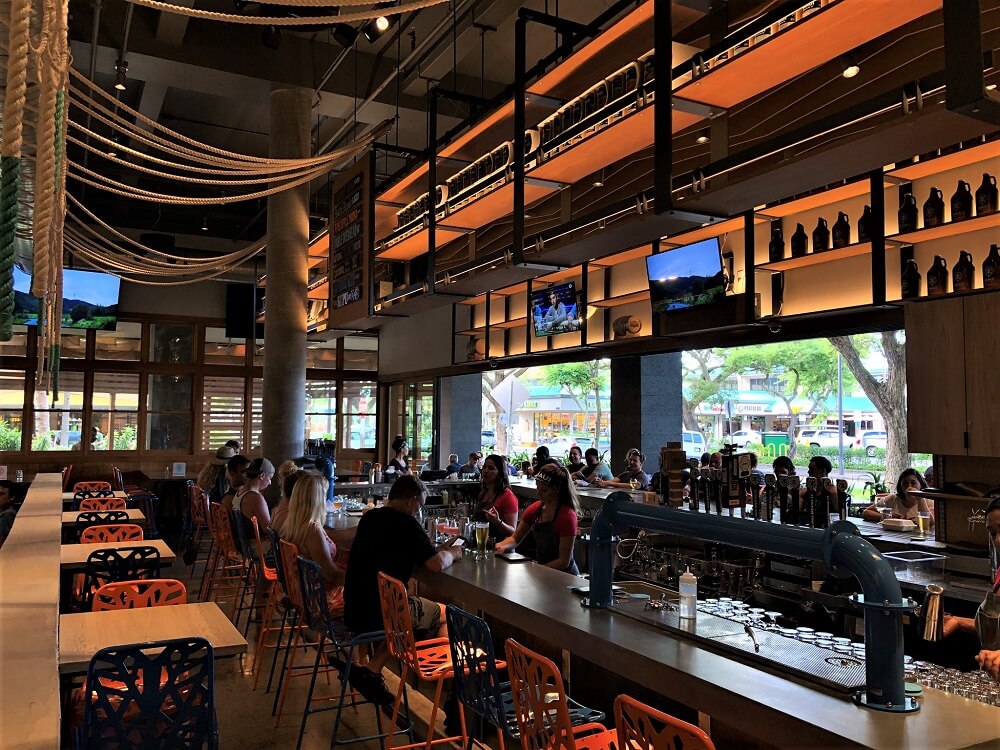 All of these have been created with skill, passion and immense island pride and IBU range from between 21 for a wheat to 70 on a double IPA. 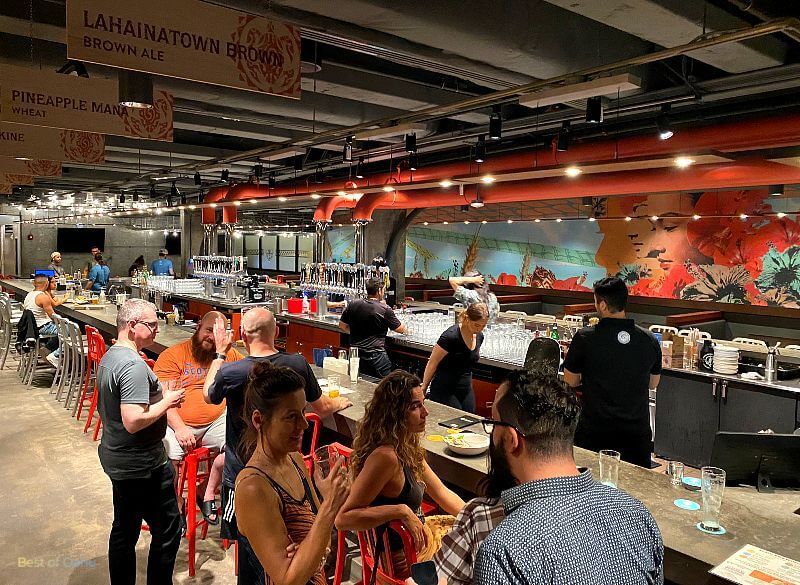 One of their most popular roof top venues can be found at the Waikiki Beachcomber by Outrigger. This family-friendly restaurant boasts a fantastic handcrafted food menu which you can enjoy in a relaxed, open-air setting, with cool tropical vibes.

The Maui Brewing Co menu is worth checking out. Their jalapeno bacon burger is right up there in terms of taste with anything you can get on Oahu, while their Baja-style fried fish tacos will have you licking your lips with delight.

As well as their beers, they also produce delicious sodas like ginger beer and root beer that are GMO-free and have no artificial color, flavours or high fructose corn syrup in them.

The Kaka’ako district now features a handful of Oahu breweries, including the Hana Koa Brewing Company, which is an impressive full production brewery that produces all of their craft beers, which you’ll find on tap.

Priding themselves on pushing the boundaries of traditional brewing, their beers are noted for their quirky names and interesting ingredients. They also have a social conscience behind them too, with a proportion of profits for each one being donated to specific causes.

The Beers - For instance, their Electric Twilit Maze is a triple hazy IPA which is made with peach puree. It has a 10.6% ABV, and a percentage of sales from it go to findyouranchorbox, a non-profit grassroots movement that strives to prevent suicide and generate awareness and education about it.  Likewise, 10% of sales from their 6.5% ABV Hazy IPA Chee Hoo Chongers beer goes to METAvivor.

Hana Koa has a long list of crafted beers with unique flavors, like their Dream Machine Raspberry IPA that is described as a raspberry vanilla milkshake. Also check out their Electric Twilit Maze Triple Hazy IPA with Peach Puree 10.6 AVB.  They also feature some interesting sours worth tasting, and a popular P.O.G Hard Kampuchea 6% AVB

Their venue is renowned for being a fun hip midsize space with an inviting modern decor and great vibe. It is a very popular place and is usually busy with patrons.  So don't be surprised if you have to wait for a table.

The Aloha Beer Company is an independent brewery that produces a fantastic range of locally brewed craft beer.

Located on Queen Street, in the heart of Oahu's historic brewery district, they claim to be Honolulu's most dog-friendly brewery, which is reason enough to go there if you have a four-legged friend.  A chilled place to hangout, the brewery presents a fabulous range of original beers that are freshly brewed on-site at the kaka'ako facility. 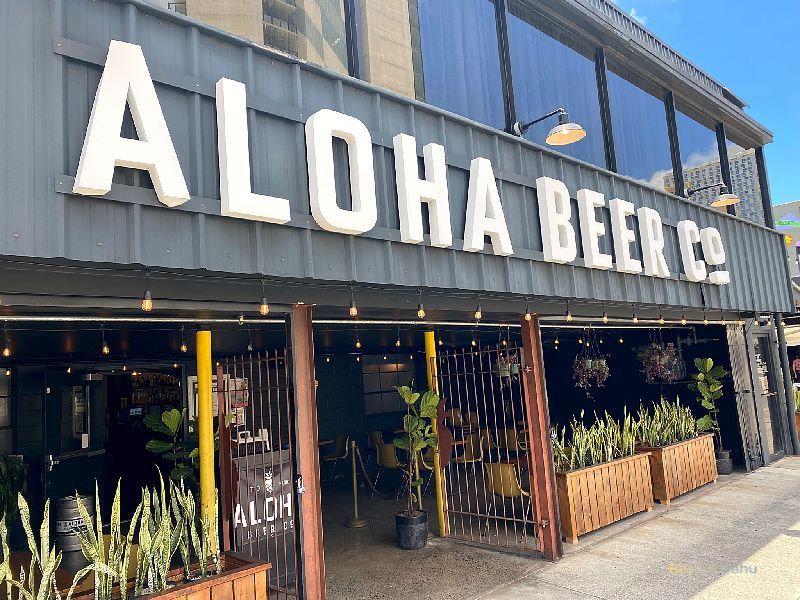 One of their best-loved creations is the Aloha Blonde, which is a light, straw colored 4.8% ABV beer that is very refreshing. Froot Lupes is a juicy IPA with a bit of a kick, thanks to its 7.3% ABV, or their ALOHA HEFEWEIZEN with hints of banana ABV 5.5%, and maybe order a COCO'AINA PORTER with toasted coconut for dessert. 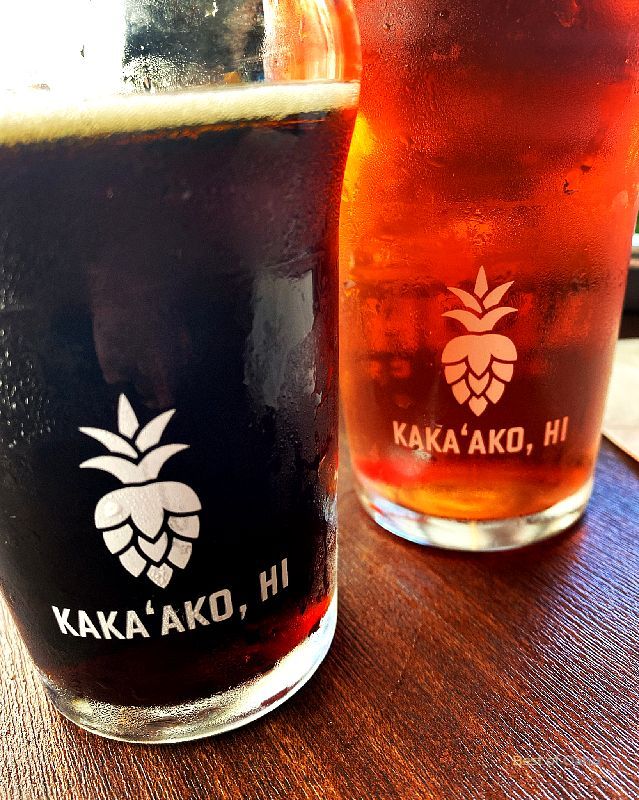 As well as their beers, they also dish up some killer cocktails and classic pub fare like waffle fries, tapas and an excellent range of pizzas which you can enjoy in their Waikiki beer garden.

Their pizza are fun to share and they have beyond a handful to choose from including a BBQ Roasted Chicken Pizza and a Pineapple Canadian Bacon Hawaiian Pizza that is of course particularly good. While they even offer sides of chicken for your dog. 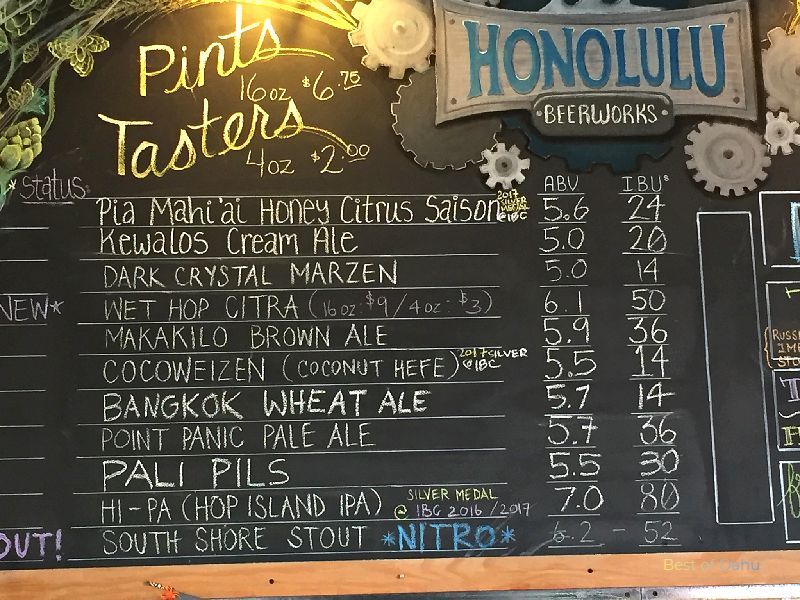 The Honolulu Beerworks is one of the coolest microbreweries in the heart of Kaka’ako, which happens to be one of the hippest neighborhoods in Honolulu.

Run by owner Geoffrey Seideman, they offer about 10 core beers on tap, and a large selection of limited edition beers worth checking out. 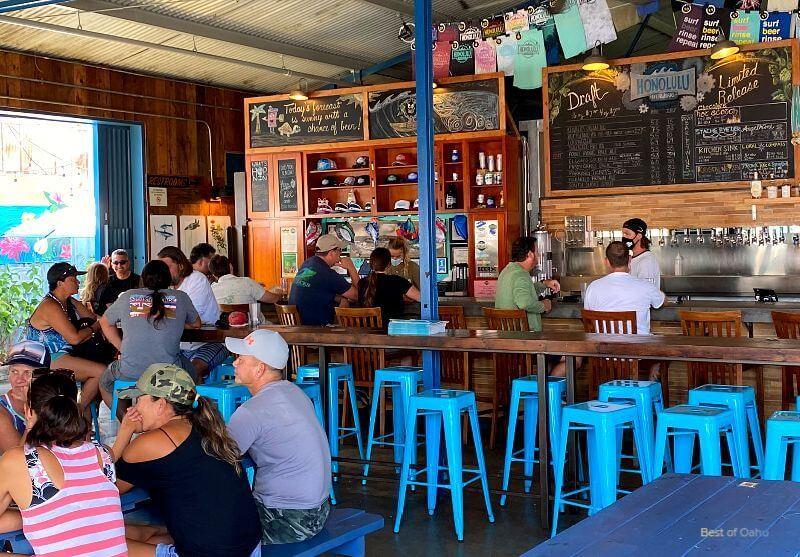 I always like trying their limited additions. You might stumble upon a Chocolate Stout with hints of Cinnamon, Nutmeg, Habanero, or a full bodied “No Shoyu Needed” Rice Lager, or a smokey Hot Scotch Ale.

This brewery is also known for a good family-friendly vibe with a delicious menu of island style and classic pub food. Make sure to check out their Beermade Mac n Cheese made a few different ways. A Smoke’m Beef Dip Sandwich. Grilled Paninis, an Asian Persusian Salad, baguette slices with ahi dip, and a Bavarian soft pretzels that are accompanied by an exquisite beer cheese fondue.

Located in Kailua Town, this little brewery has been growing by leaps and bounds. The Lanikai Brewing Company has been turning heads with there crafted beers and sours, and quite notable in the list of best Oahu breweries. 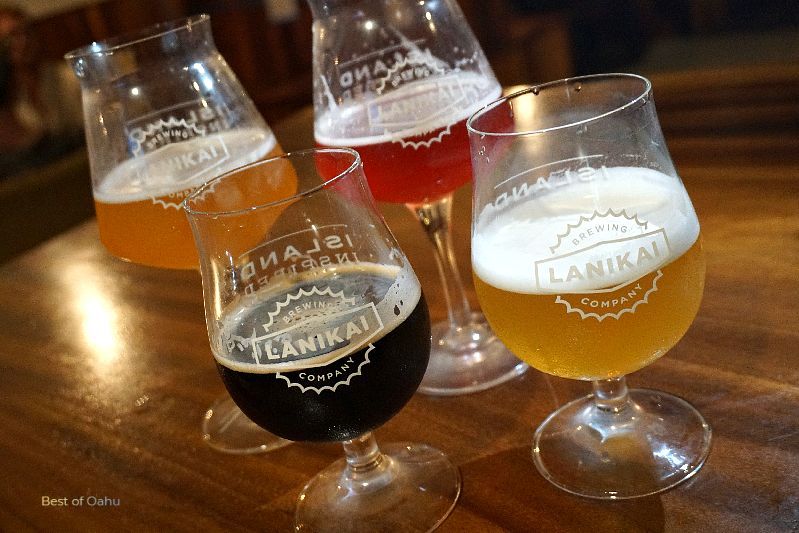 Known for their creativity and innovation, this accomplished craft beer producer makes all of its labels in Hawaii, using local, exotic and rare ingredients other manufacturers wouldn't think of including in their brewing process.  This includes the likes of yuzu, mamaki, pikake, white tea, mushrooms, longan, tangor, guava, turmeric and milo.

It is a strategy that has not gone unnoticed by some of the industry's most astute judges. Their 6.5% ABV Pillbox Porter, which is made from both Tahitian and Hawaiian vanilla, has won the gold medal at the 2021 Hawaii Craft Beer Awards in the 'Best Porter' category.

Their flagship Cali' Creamin' is also much loved. Taking the form of a pale color brew with a medium body, white head and low bitterness that hits all the right notes when served ice cold.

Their Brew Hefe-ner (Hefeweizen) 5.5% ABV with toasted Macadamia Nut, and their popular Moke’s Imperial IPA 8.1% ABV are also worth a 4 oz sample or more.

While their Tap and Barrel tasting room is situated in Kailua, the Lanikai Brewing Company has a notable presence in Oahu, as well as Maui, Kauai and Big Island. Their beers are also distributed to Australia, Japan and the Pacific Northwest too.

Note, the Lanikai Brewing Company does not have a full kitchen inside, but they have a commercial size pizza oven outside, and serving up their delicious creations to a hungry crowd inside.