Sharks Cove is a popular Oahu attraction in the North Shore for its amazing snorkeling experience.  Not far from Haleiwa Town, and around the corner from Waimea Bay, is this unique, reef-protected Oahu beach cove that got its name from its shape which keenly resembles that of a shark. 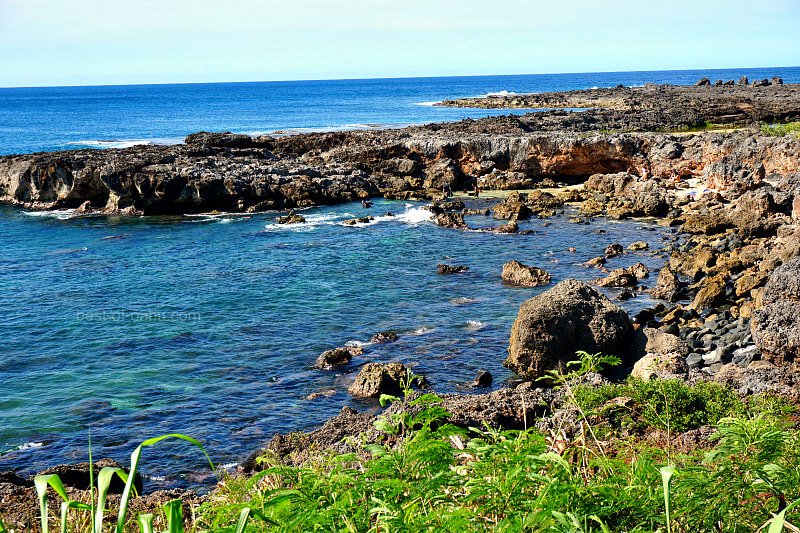 Not to worry, you are highly unlikely to see a shark at this Oahu beach.  You are more likely to see green sea turtles swimming about.

There is a large array of fish that call Sharks Cove home.  The 80-acre marine life conservation park is largely made up of reef and volcanic rock that spans about a football field across, giving it with many great nooks and crannies to explore.

There are plenty of crevices, caves, tunnels, and places to hide that make this beach cove quite the playground for tropical fish to dart in and out of, as if playing hide and seek, to snorkelers' delight. 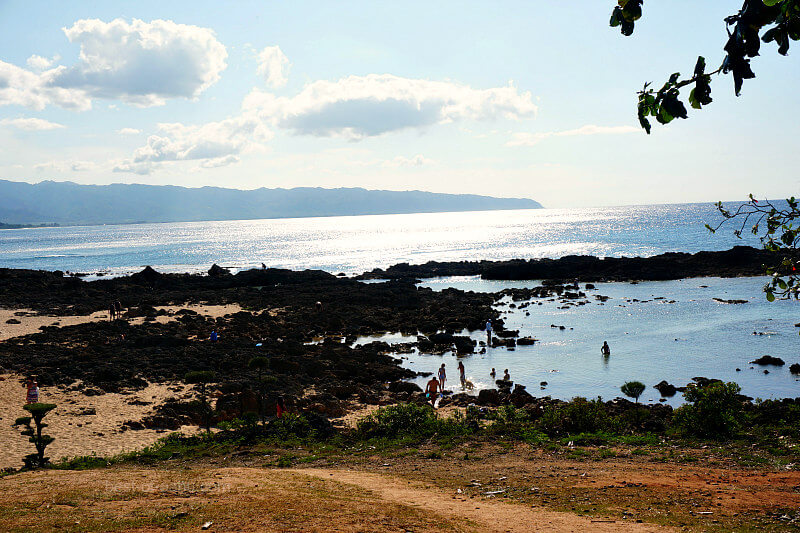 There are two sections to Sharks Cove.  The east side is shallower with many tide pools, and the west side is the deeper section and better for snorkeling.

Unlike Hanauma Bay that tends to get busy most days with up to 3000 visitors, Sharks Cove is a great alternative with far less crowds, clearer waters, an abundance of fish to see, and is also a free Oahu attraction.

The porous reef creates protection and home to a large array of fish.  Definitely too many to name, but there are Triggerfish, Butterflyfish, Parrotfish, and Damselfish in abundance.

It’s definitely a colorful mix, and they tend to swim in large schools.  You’ll find others hiding in the reef…and maybe even a moray eel or two. 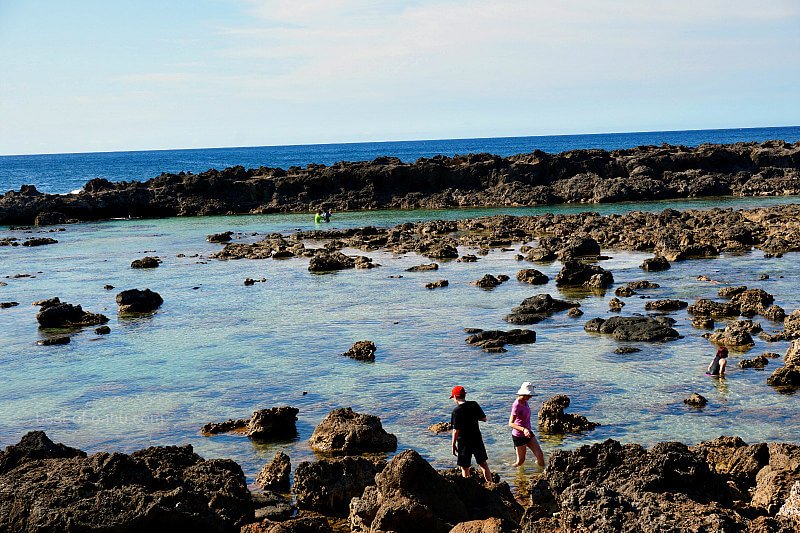 Only look with your eyes and do not attempt to reach towards the moray eels, or you may get bitten.

Also, do not approach, feed, or harass Green Sea Turtles swimming about, or Monk Seals that approach the cove.  It is a federal crime to do so, and these sea animals have been known to defend themselves when approached.

While there isn’t much beach surrounding this North Shore  beach cove, it is part of Pupukea Beach Park, which is beautiful, and a good choice to set up camp for the day.  Three Tables Beach on the other side is another small, sandy, beautiful snorkeling beach.

Show up during low tide and you’ll find plenty of tide pools to explore, and at high tide, you'll have a large area to snorkel at your heart's content.

It’s typically only a few feet deep when you are close to shore, but it progressively gets deeper as you swim out towards the ocean.

It’s said to be around 20 feet deep at the mouth of the cove that opens up to the ocean, and up to 40 feet deep just outside the cove.

It is not recommended to go outside the cove, especially if you are not a good swimmer or experienced snorkeler.

There is NO life guard on duty at this Oahu beach, and there are a lot of obstacles in the water that you will need to navigate around. 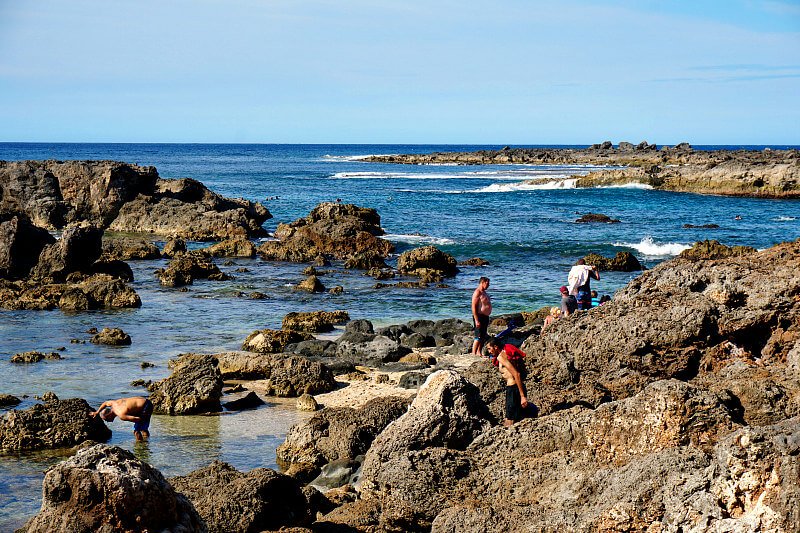 For those who are determined to go beyond the Sharks Cove outer reef wall, there are larger fish lurking about in the deeper waters.

There are also larger caves and tunnels located on the west side of the reef going towards Three Tables Beach, which is another fantastic diving and snorkeling area.

As tempting as it may be, I would not recommend swimming into these caves and tunnels where you could get stuck and or risk running out of air. 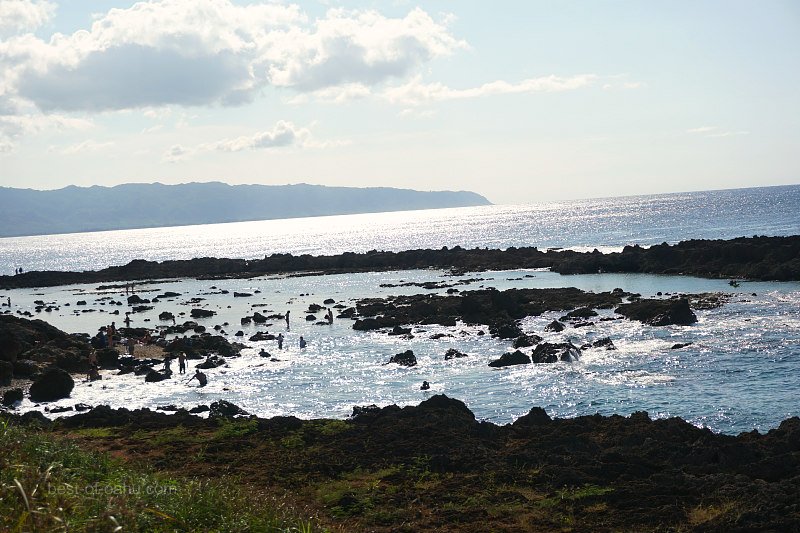 Also do not enter the water in this area when waves are present.  Larger waves tend to smash into the outline barrier wall and cascades inside the cove.

Rip currents can form as you get closer to the opening to the ocean and can become very dangerous if you get sucked out to sea.  The surf tends to get large during the winter months and flat during the summer months.

But once in a while a swell can emerge in the summer as well, so pay attention when you arrive.  You can also check the surf report before heading up to the North Shore. 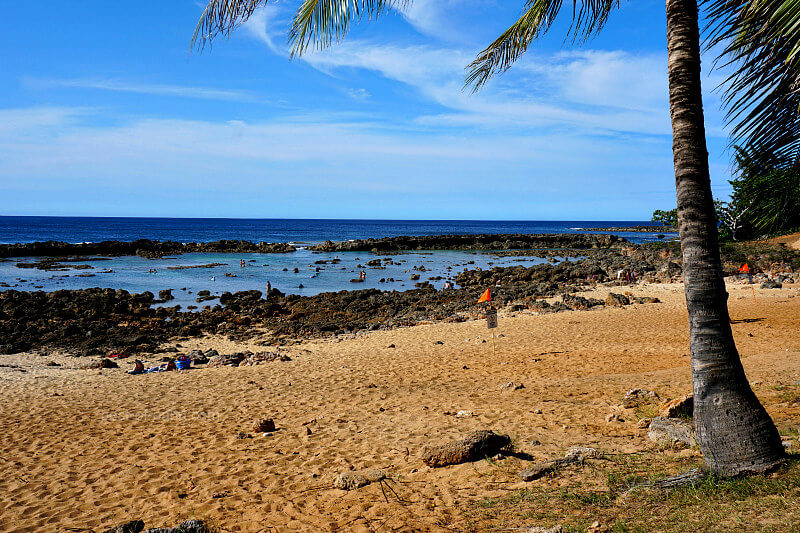 After you pass Waimea Bay, keep going until you see the Foodland Market on your left hand side, and the cove will be across the street.

Take the 52 bus from Kuhio Ave to Haleiwa Town, and transfer to Oahu Bus number 88A or 60.  These Oahu Bus will take you  to the North Shore Beaches.

Ask the bus driver once again to notify you once you have arrived at Sharks Cove.

Note:  Bus # 88A also travels from the Ala Moana Center to the North Shore and backdown the Windward (East) side of the island.