The Pali Lookout is not just another scenic spot on Oahu, it’s actually a sacred area where one of the largest Hawaiian battles took place in late 1794.  This Honolulu attraction is the dividing point between town side and the beautiful Windward side. It’s a short drive outside of Waikiki, and offers some of the most beautiful views of the eastern side of the island, with sky scrapping Ko’olau Mountains in the background and a lushes green valley below. 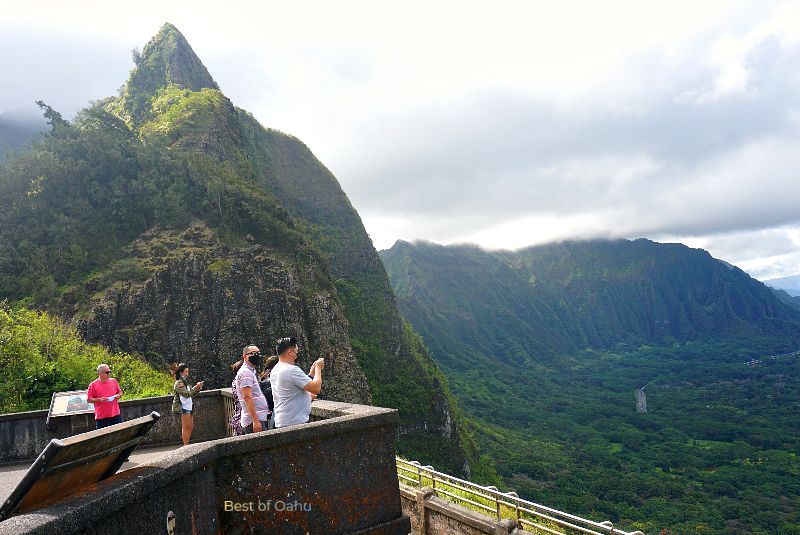 You can see a long stretch from Kailua all the way to Chinaman’s Hat in Kualoa, and aqua blue ocean as far as the eye can see.  It’s hard to believe with so much beauty in the horizon that this was the spot where King Kamehameha drove his enemies up the Pali and over the cliff side. 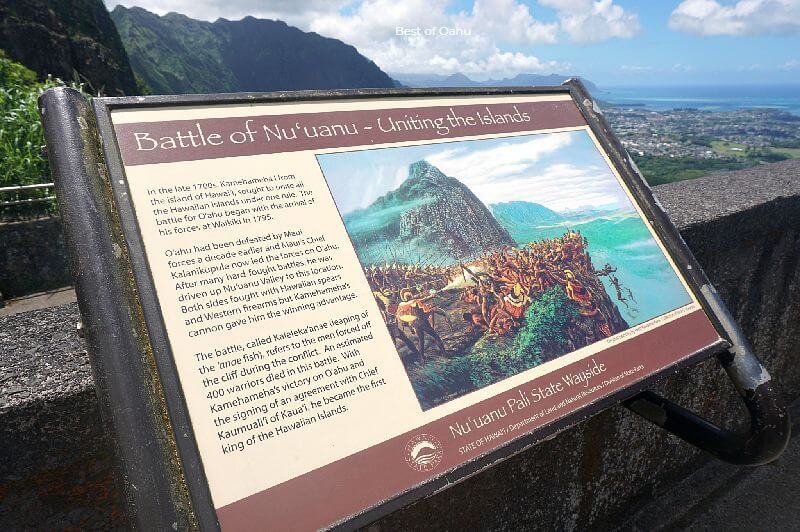 If you want to experience the best of Oahu’s natural wonders without having to take on a steep trail or fearsome surf, head up Highway 61 in Nuuanu to experience this iconic lookout.

The Pali Lookout rises 1200 feet above the tropical Ko’olau Mountainside and the stunning Pacific Ocean below, and is one of the more memorable lookouts on the island. 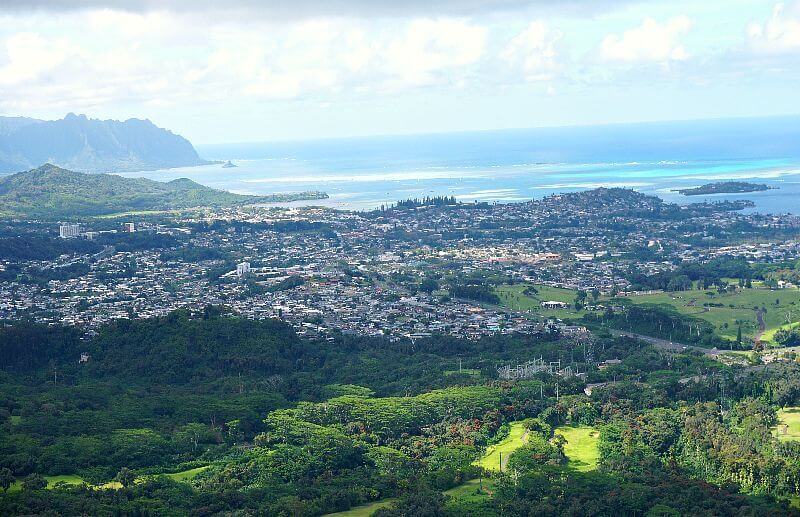 The island is teeming with stunning mountainous topography and breathtaking ocean views, but nothing compares to the Pali.

The lookout offers visitors unrivaled, unobstructed views of the windward side of the island. Additionally, the Nuuanu Pali Lookout is more than just a great view, it’s also the site of an important King Kamehameha victory.

The best way to get to the Pali Lookout is by car, or signing up for an island tour bus ride that makes a stop here.  From the parking lot, it is a quick walk to some grand viewing platforms.

And while the wind might seem tame in the parking lot, expect a dramatic change with hurricane force winds whistling up the mountainside as you approach the viewing decks.  Hold onto your hat tight, and if you could lose your footing, you just might find yourself being blown over. 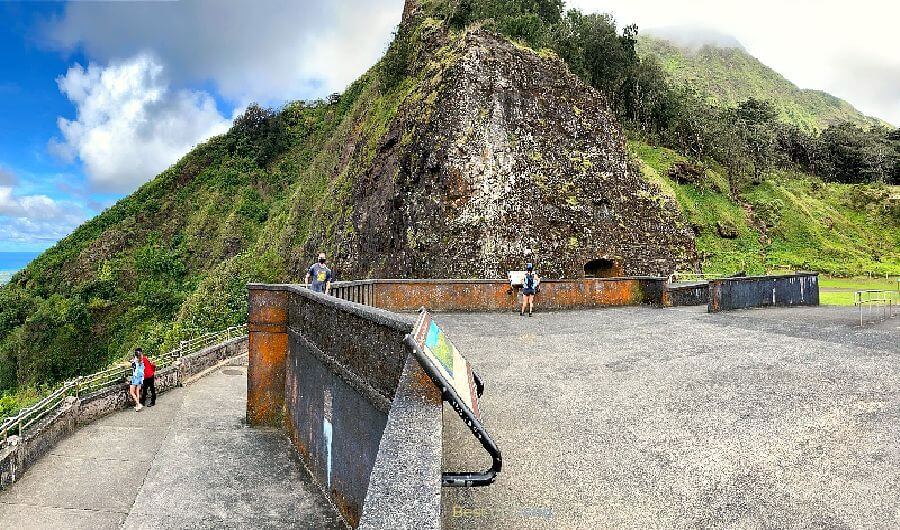 Make it to the viewing platform and you might feel the wrath of the ragging powerful winds.  Be mindful not to hold anything over the railing, as countless phones, cameras, sun glasses, hats, and other valuables have been lost to the spirits below.

There are two long viewing platforms on 2 levels, allowing you to take in many different perspectives views of the surroundings.  While some are here to just get a few pictures and move on, many others find themselves in awe, and could spend well over an hour exploring and taking it all in.

You used to be able to hike down the old Pali road that was constructed in 1845 and allowed travelers to pass to the other side of the island.  It closed in 1959 when the tunnels and Highway was built, and was transformed into a hiking path, which you could access from the lower platform. 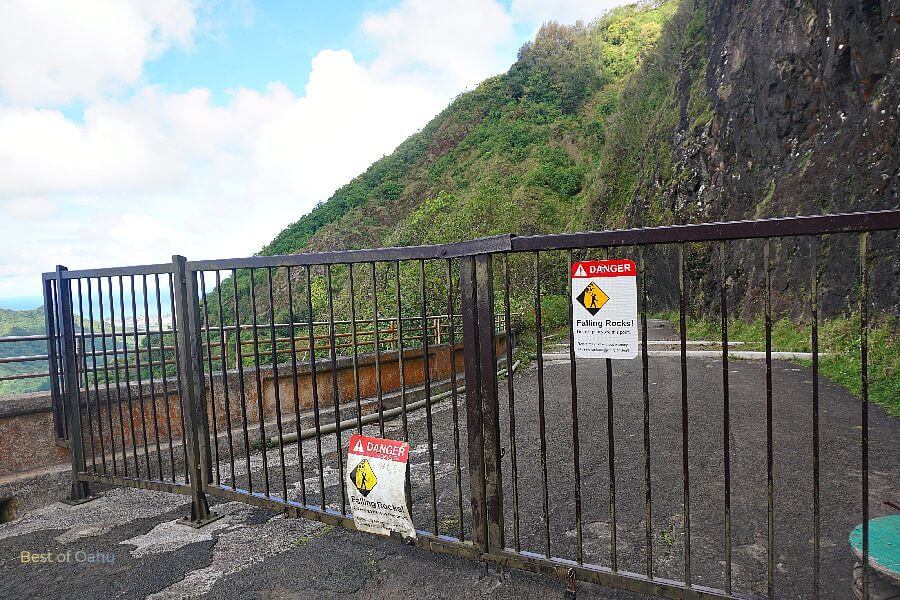 But it has remained closed for the past few years due to a rockslide that has made the passage unsafe.  It was a fun wide pathway hike with beautiful costal views.

There is also a side trail that branched off from the old Pali Road, which leads to Likeke Falls. You can still experience this beautiful 2-tiered Oahu waterfall if you drive about 10 minutes onward towards Kailua, to the First Presbyterian Church of Honolulu, located below the Pali Hwy. 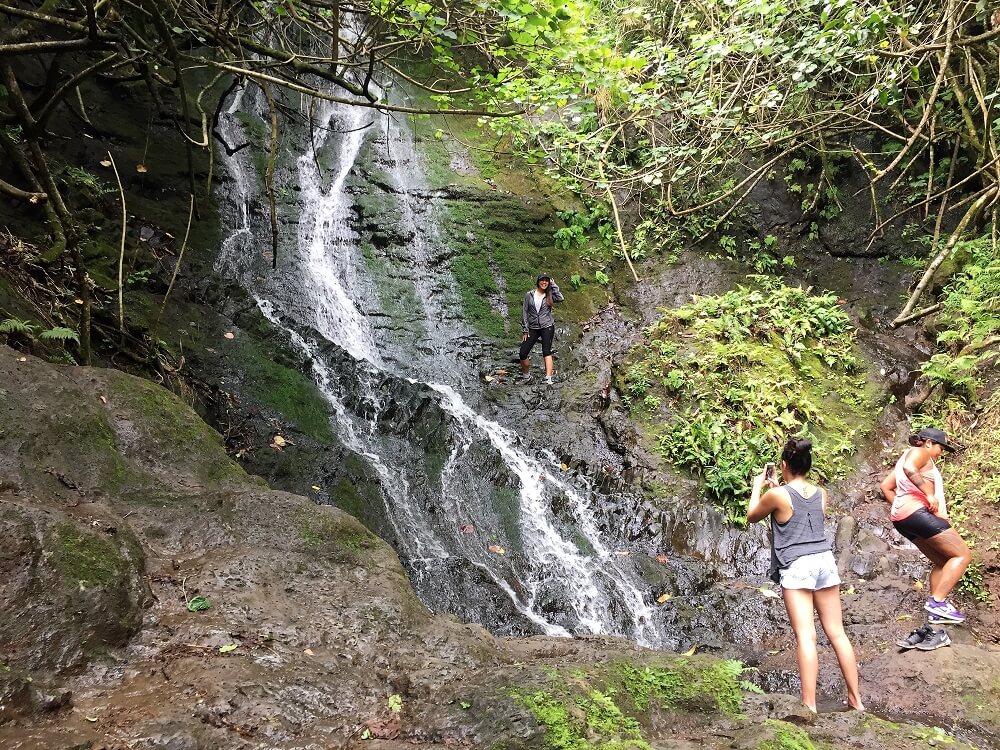 There are some signs, informational boards, and illustrations that demonstrated the history and battle that took place here. 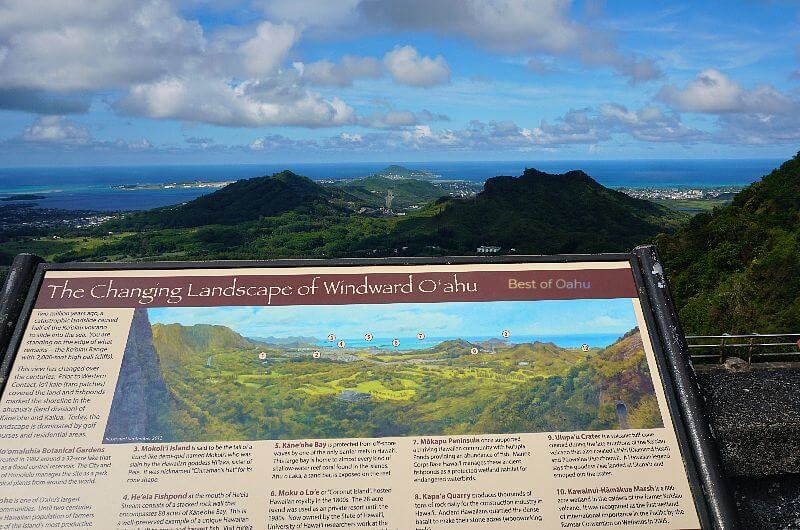 There is a unique jagged mountain peak in the area known as Pali Notches (left side of the platforms) that is very distinctive and powerful looking...you’ll know it when you see it.

It not only helps define the Pali, but characterizes what took place over 200 years ago.  Lots of folks say it’s not uncommon to feel the presences of the Hawaiian spirits in the area… I can only advise to be respectful when visiting.

As we stated above, the Pali Lookout offers panoramic views of the windward coastline of Oahu. There are several railed viewing platforms facing different directions that provide sweeping views of the lush mountaintops, the vibrant Pacific Ocean, and beyond. Pali translates to cliffs. 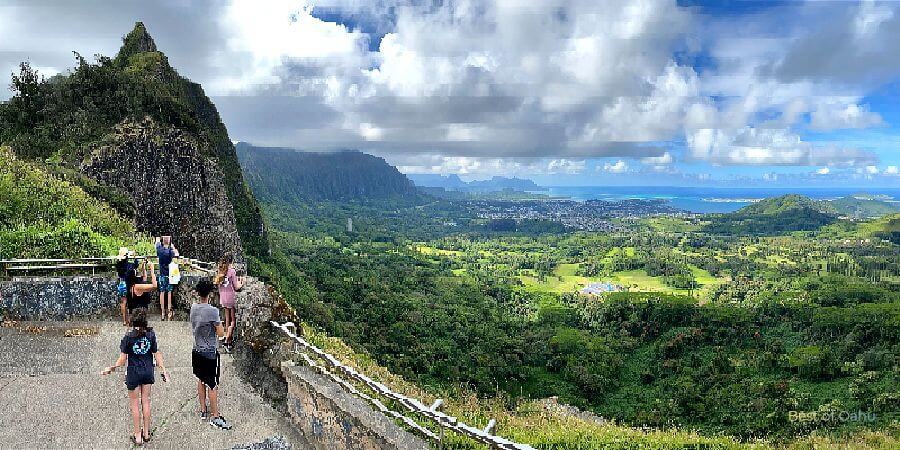 Pali Lookout is one of the only places on the island where you can get a bird’s eye view of Kaneohe Bay and Chinaman's Hat (Mokolii). 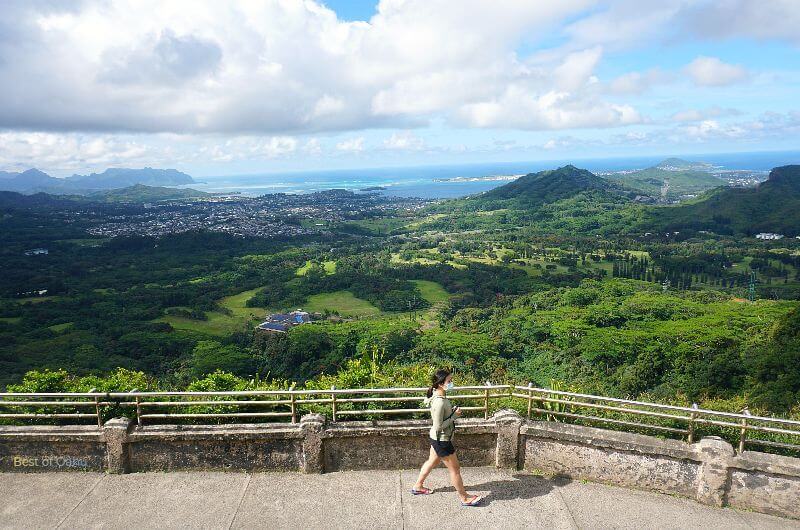 Hold on tight to your loose clothing as the trade winds blow and gaze in amazement as the shadows of passing clouds transform the tropical land and water below.

This unique vantage point is made special not only by the unobstructed views but by its unique history.

History of the Pali Lookout

Like much of Oahu, Pali Lookout is steeped in Native Hawaiian history. The Pali Lookout has been a crucial piece of land throughout Hawaii’s storied history because it is a relatively low-lying, traversable area within the Koʻolau Mountain Range. Over 200 years ago, the Battle of Nuuanu took place on the site of today’s lookout. 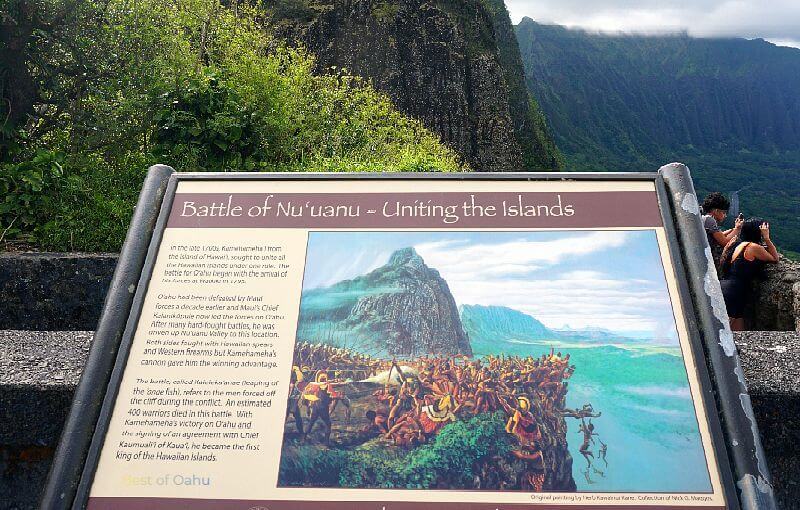 The Battle of Nuuanu was one of the bloodiest battles in Hawaii’s history. King Kamehameha sailed from his home island of Hawai’i with an army of 10,000 warriors, including some non-Hawaiian fighters. He was on a mission to conquer Oahu and unify the Hawaiian island chain.

King Kamehameha I and his men drove the Oahu fighters through the valley and trapped them above the high cliffs where they were forced off to their deaths. After King Kamehameha I defeated his foes on the Pali Lookout in 1795, he conquered the Island of Oahu and later all of Hawaii.

He would go on to unify the islands in 1810 and become the first ruler of the Kingdom of Hawaii. None of this would have been possible without his decisive victory on the site of the Pali Lookout. 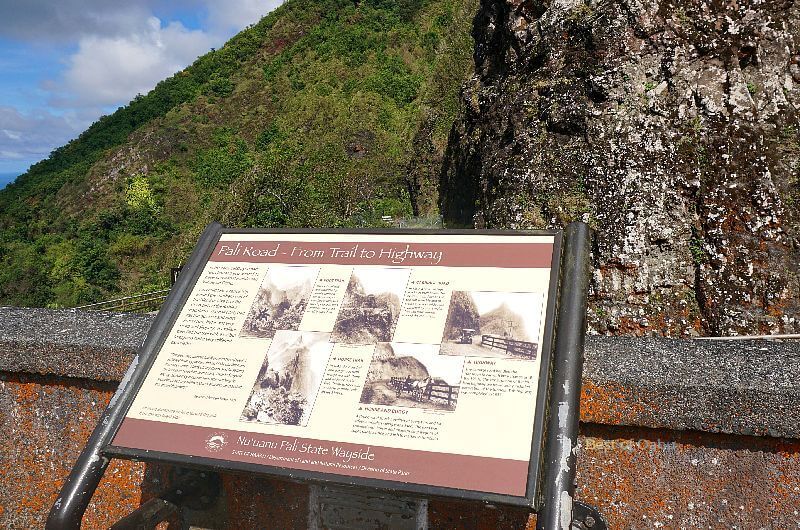 In 1845, the first road was constructed the Nuʻuanu Pali to connect the windward side of Oahu with the capital, Honolulu.

In 1898, the Nuʻuanu Pali was further developed into a larger highway. During the development, construction workers found 800 human skulls, remnants from the ancient battle, and of the warriors who fell to their deaths. In 1959, the Pali Highway as we know it today was constructed.

As the site of an infamous battle where hundreds, if not thousands of Hawaiian warriors met their death, it’s only natural the area is associated with a handful of supernatural legends.

As the legend goes, two large stones towards the end of Nuʻuanu Valley are said to represent a pair of goddesses who are the guardians of the page down Pali. Travelers used to leave flower offers to ensure safe travel. 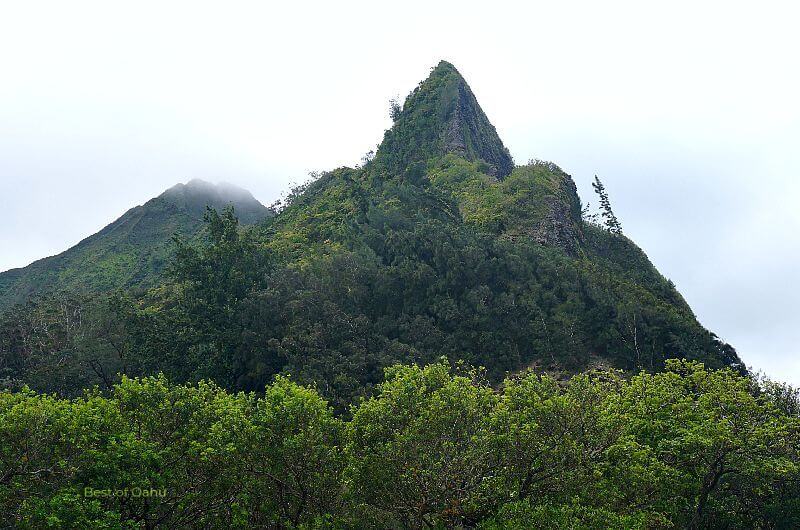 It’s also said that parents would bury the umbilical cords of their newborn children under the stones as protection against evil.

Another legend states that the pass is home to a “moo wahine,” a mystical lizard that takes the form of a beautiful woman and leads male travelers to their deaths off the Pali cliffs. 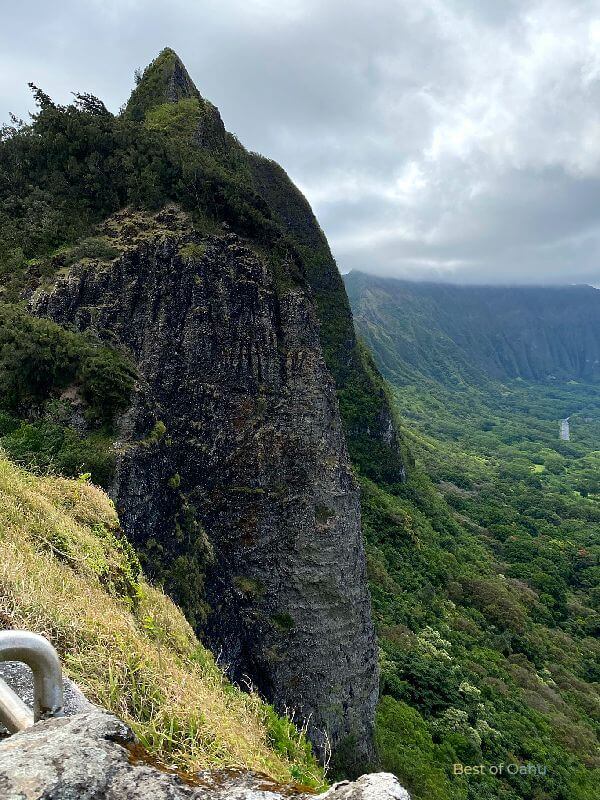 Hawaiian legend states that travelers in Pali area should never carry raw pork over the passage, especially at night. Pele, the volcano goddess is said to be mortal enemies with Kamapua'a, a half-human half-hog god. It is said bringing pork would anger her.

There are countless stories of drivers experiencing car problems, not being mindful, bringing pork up and over the Pali Hwy.

Experience the otherworldly views from Pali Lookout and immerse yourself in Hawaiian history and folklore with a visit to Nuuanu Pali State Park.

What to Bring to the Pali Lookout 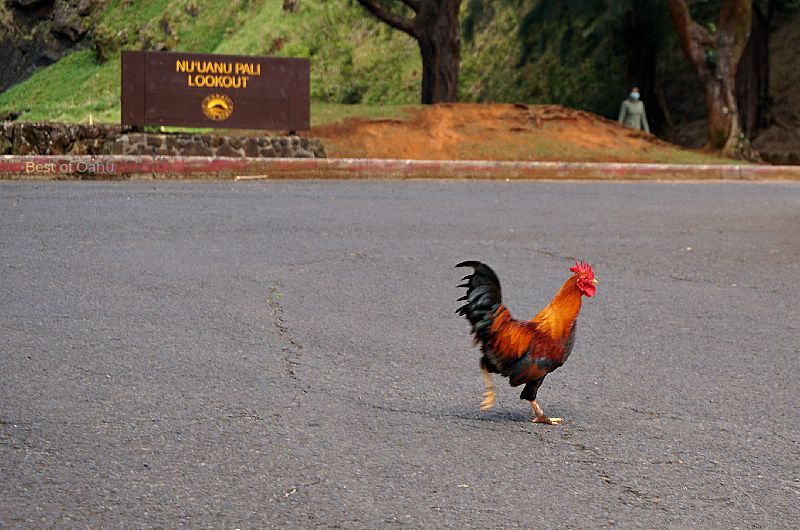 While the Nuuanu Pali Lookout is not a hike, it’s advisable to dress in sturdy shoes and bring a rain jacket/ windbreaker, even though you might not need it. The weather in Hawaii can be unpredictable, and the Pali Lookout is notoriously windy.

Trade winds are funneled through the valley on either side of the mountains and blow up the face of the Pali Lookout. Visitors frequently lose their hats in the wind, and some are even knocked off their feet.

You will want to bring your cameras, video cams, and cell phones to capture the magical views.

As always, pack out whatever you bring. Do not leave any trash or discarded items near the lookout.

Getting to the Pali Lookout

Pali Lookout is located on Oahu’s Pali Highway in Nu'uanu Pali State Park near the southern tip of the island between Honolulu and Kailua.

Just a short 5-mile drive out downtown Honolulu will bring you to one of the island’s most pristine areas with panoramic views of the sheer Koolau cliffs and vibrant Windward Coast. 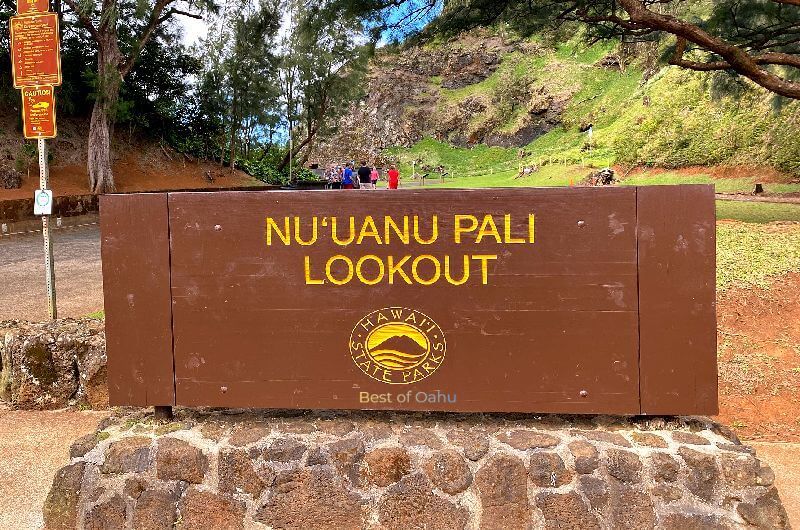 The drive alone will leave you in awe as you climb up winding, mountainous Pali Highway surrounded by nature. From Waikiki, take route 61 (the Pali Highway) and follow signs for the lookout.

The viewpoint is open to visitors from 6 AM to 6 PM, and there is plenty of free parking for residents and a $7 parking for non-residents.

Be sure to secure your valuable and leave nothing in plain sight, as break-ins are known to occur in this area. 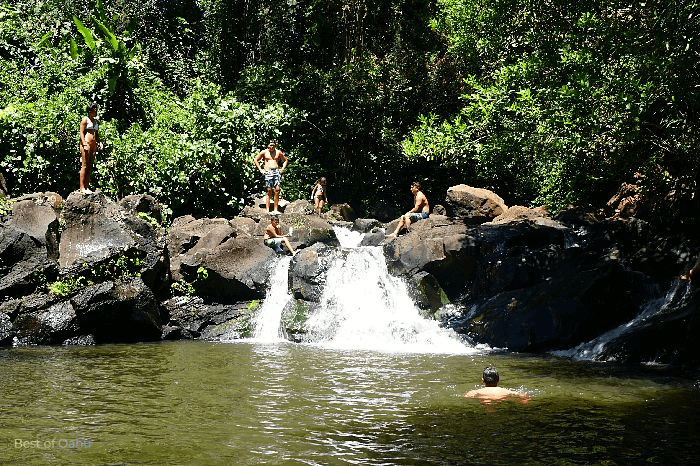 Also in the area, located off the old Pali Road, is the Judd Trail.  This Oahu trail is a fairly easy 1 mile loop that wonders through some beautiful towering Norfolk Pine Trees.

The trail ends at a natural mountainside  pool known as Jackass Ginger Falls.    It feels like a waterpark, and the local kids gravitate towards it. 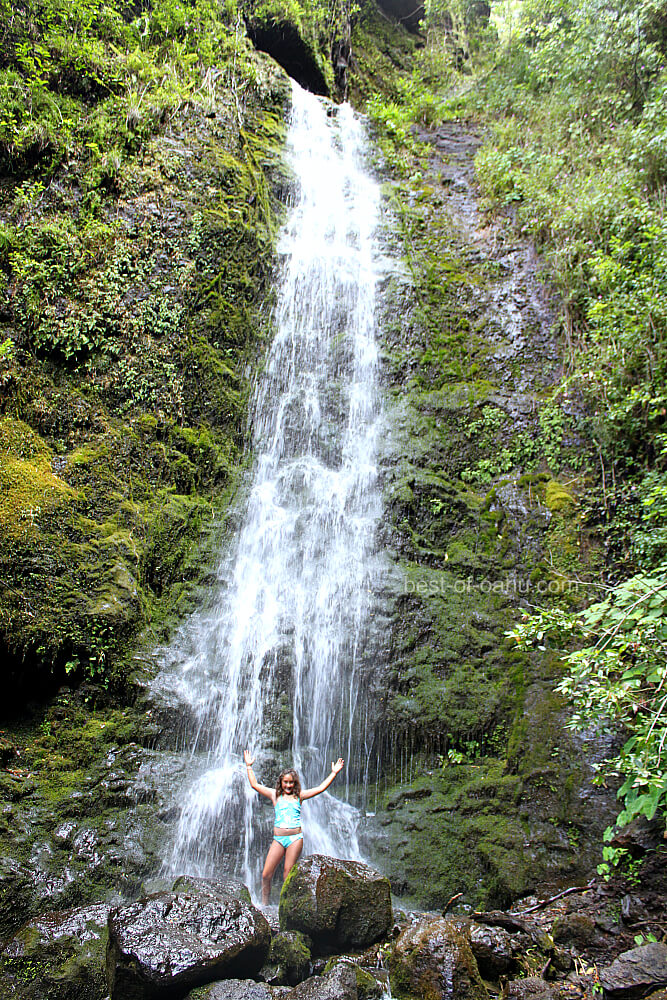 Close by to the Pali Lookout is Lulumahu Falls, which is an impressive 50 ft plus waterfall.

It's not exactly an easy hike, as you'll need to travel across some old hunting grounds, through a bamboo forest, along the Nu'uanu Reservoir, and up a narrow stream to get there. 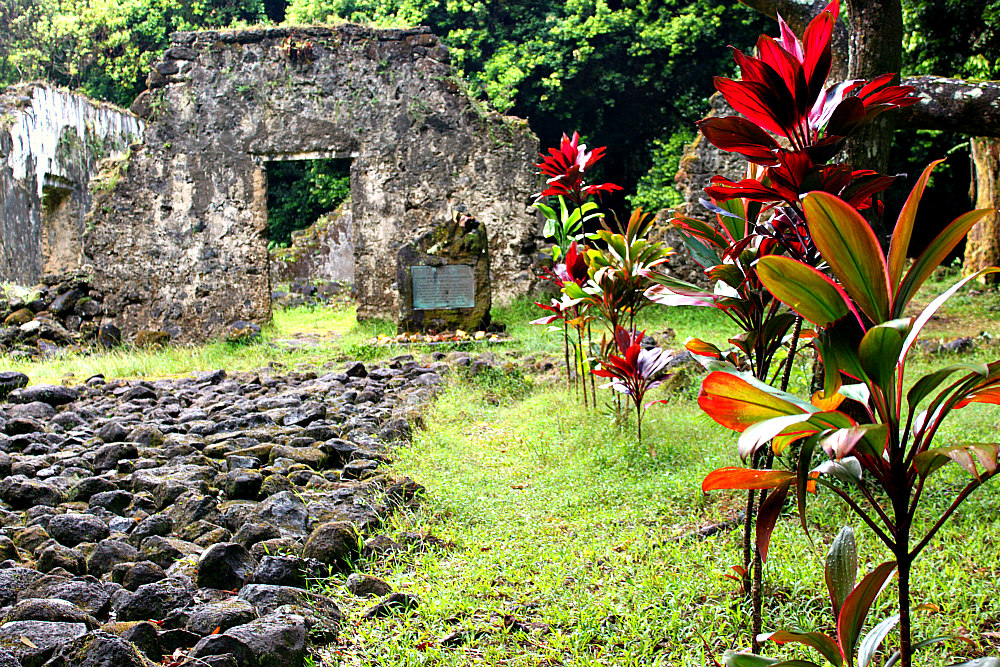 The Kaniakapupu Ruins are incredible and an amazing find to this hike!  There’s not much left to the 1847 structure, but it was an area where 10,000 Hawaiian once gathered.